My list of books grows larger and larger with the amount of fantastic ones coming out. This year is no different. I wanted to take this opportunity to highlight a couple of titles—specifically by black authors—that I’m so excited to read.

Let’s see what these books, shall we?

Shuri and T’Challa: Into the Heartlands (A Black Panther Graphic Novel) by Roseanne A. Brown & Dika Araújo 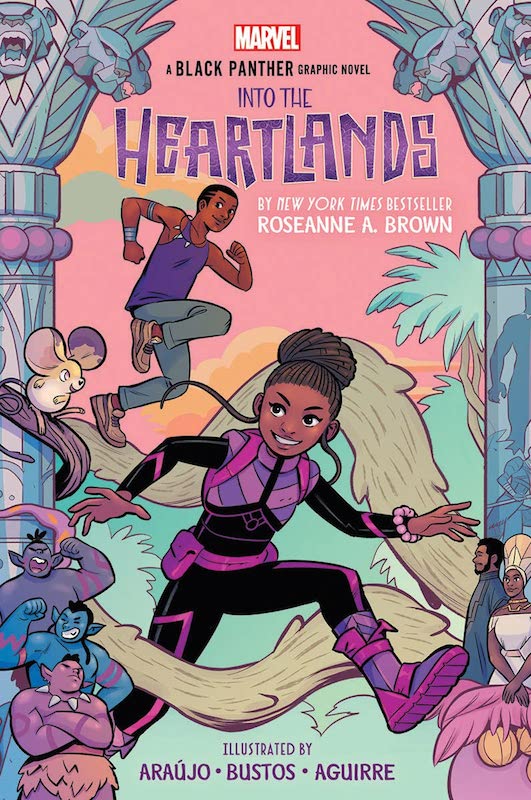 Shuri and T’Challa set out to remove a curse from Wakanda in this action-packed, totally original graphic novel!

Twelve-year-old Shuri is a lot of things. Scientist. Princess. All around cooler person than her pain-in-the-butt big brother T’Challa. Shuri knows she could do so much more to help Wakanda, but everyone is obsessed with the prince because he’s the next Black Panther. That is, until Soul Washing Day, one of the most important rituals of Wakandan society.

When an argument between T’Challa and Shuri leads to one of Shuri’s inventions accidentally destroying the sacred ceremony site, chaos reigns instead of prosperity. Suddenly the people of Wakanda, including her mother the queen, are becoming sick! Could this be a curse from the ancestors? Desperate to save her mother, Shuri dives into research and finds an answer hidden deep in an ancient children’s myth. It may be nothing more than a fantasy, but with the sickness spreading each day, the young princess must trust her instincts and travel deep into the mysterious Heartlands to save her family and her kingdom.

Joining Shuri on her journey is none other than a meddling T’Challa. If Shuri and T’Challa can set aside their jealousy and resentment of each other long enough to survive this journey, they might just discover that they are far more powerful together than they could ever be apart. But if they can’t face their fears in the Heartlands and lift the so-called curse, it may not be just the end for their family, but the end of Wakanda as they know it. No pressure, right?

By the Book by Jasmine Guillory 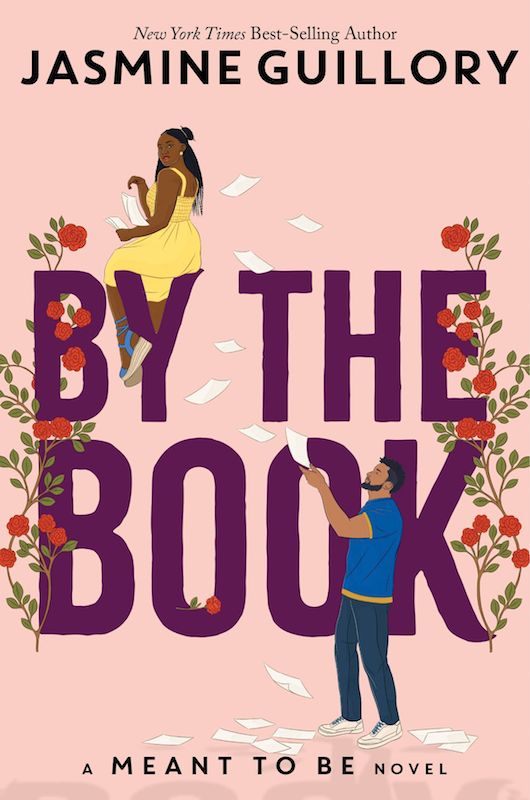 A tale as old as time—for a new generation… Isabelle is completely lost. When she first began her career in publishing right out of college, she did not expect to be twenty-five, living at home, still an editorial assistant, and the only Black employee at her publishing house. Overworked and underpaid, constantly torn between speaking up or stifling herself, Izzy thinks there must be more to this publishing life. So when she overhears her boss complaining about a beastly high-profile author who has failed to deliver his long-awaited manuscript, Isabelle sees an opportunity to finally get the promotion she deserves.

All she has to do is go to the author’s Santa Barbara mansion and give him a quick pep talk or three. How hard could it be?

But Izzy quickly finds out she is in over her head. Beau Towers is not some celebrity lightweight writing a tell-all memoir. He is jaded and withdrawn and—it turns out—just as lost as Izzy. But despite his standoffishness, Izzy needs Beau to deliver, and with her encouragement, his story begins to spill onto the page. They soon discover they have more in common than either of them expected, and as their deadline nears, Izzy and Beau begin to realize there may be something there that wasn’t there before.

Why would I want to read By the Book? A romance between bookish people? Sign me up. 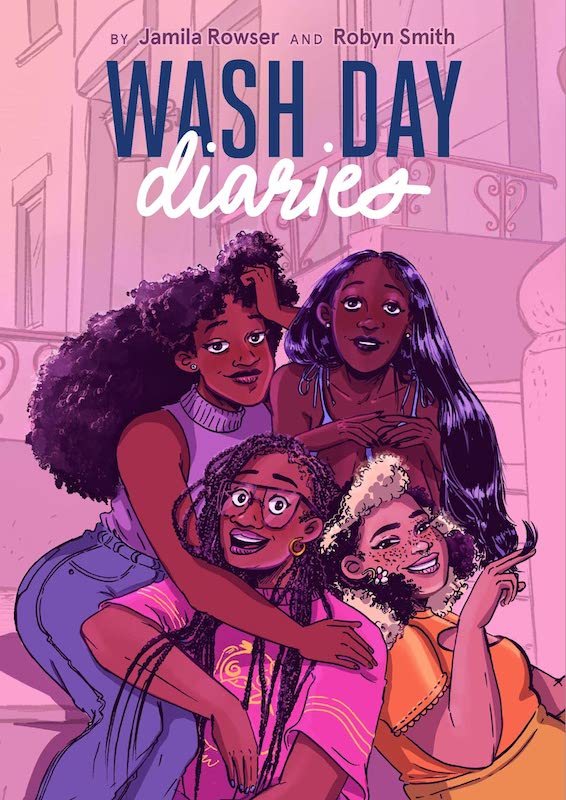 Wash Day Diaries tells the story of four best friends—Kim, Tanisha, Davene, and Cookie—through five connected short story comics that follow these young women through the ups and downs of their daily lives in the Bronx.

The book takes its title from the wash day experience shared by Black women everywhere of setting aside all plans and responsibilities for a full day of washing, conditioning, and nourishing their hair. Each short story uses hair routines as a window into these four characters’ everyday lives and how they care for each other.

In expanding the story of Kim and her friends, the authors pay tribute to Black sisterhood through portraits of shared, yet deeply personal experiences of Black hair care. From self-care to spilling the tea at an hours-long salon appointment to healing family rifts, the stories are brought to life through beautifully drawn characters and different color palettes reflecting the mood in each story.

At times touching, quiet, triumphant, and laugh out loud funny, the stories of Wash Day Diaries pay a loving tribute to Black joy and the resilience of Black women.

Why would I want to read Wash Day Diaries? I’m all about female friendships, and I love that this graphic novel is connected via hair care. That’s not something you see often portrayed or explored in books.

Burn Down, Rise Up by Vincent Tirado 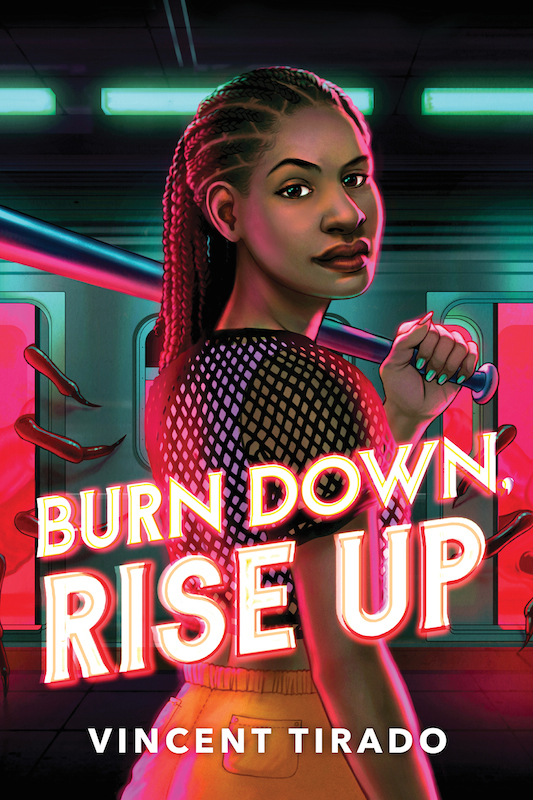 Mysterious disappearances.
An urban legend rumored to be responsible.
And one group of teens determined to save their city at any cost.

For over a year, the Bronx has been plagued by sudden disappearances that no one can explain. Sixteen-year-old Raquel does her best to ignore it. After all, the police only look for the white kids. But when her crush Charlize’s cousin goes missing, Raquel starts to pay attention—especially when her own mom comes down with a mysterious illness that seems linked to the disappearances.

Raquel and Charlize team up to investigate, but they soon discover that everything is tied to a terrifying urban legend called the Echo Game. The game is rumored to trap people in a sinister world underneath the city, and the rules are based on a particularly dark chapter in New York’s past. And if the friends want to save their home and everyone they love, they will have to play the game and destroy the evil at its heart—or die trying.

Why would I want to read Burn Down, Rise Up? An urban legend involving a game with people trapped underneath the city AND it’s sapphic?! Okay, yes. Let’s see what this book has to offer, and what vibes it has (based on the Stranger Things meets Get Out marketing blurb).

The Ballad of Perilous Graves by Alex Jennings 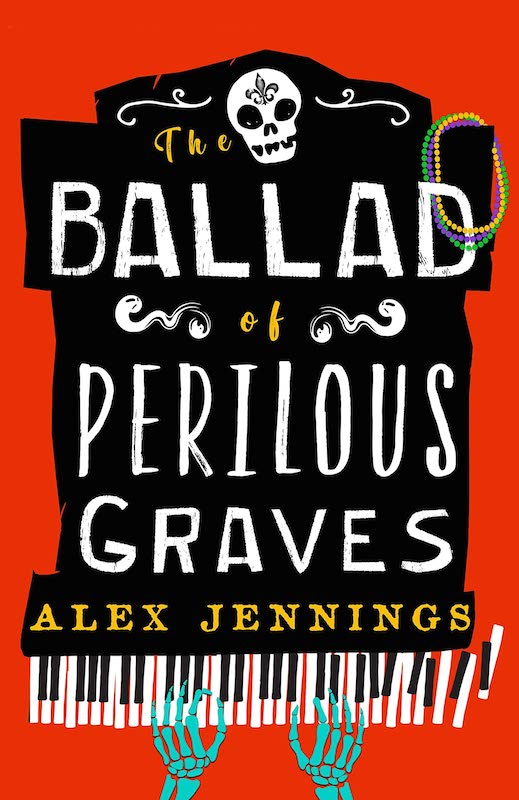 In a fantastical version of New Orleans where music is magic, a battle for the city’s soul brews between two young mages, a vengeful wraith, and one powerful song in this vibrant and imaginative debut.

Nola is a city full of wonders. A place of sky trolleys and dead cabs, where haints dance the night away and Wise Women keep the order, and where songs walk, talk and keep the spirit of the city alive. To those from Far Away, Nola might seem strange. To failed magician, Perilous Graves, it’s simply home. Then the rhythm stutters.

Nine songs of power have escaped from the magical piano that maintains the city’s beat and without them, Nola will fail. Unexpectedly, Perry and his sister, Brendy, are tasked with saving the city. But a storm is brewing and the Haint of All Haints is awake. Even if they capture the songs, Nola’s time might be coming to an end.

Why would I want to read The Ballad of Perilous Graves? New Orleans is a place that brims with history and culture, and with this book adding actual magic involving music? That is fascinating. 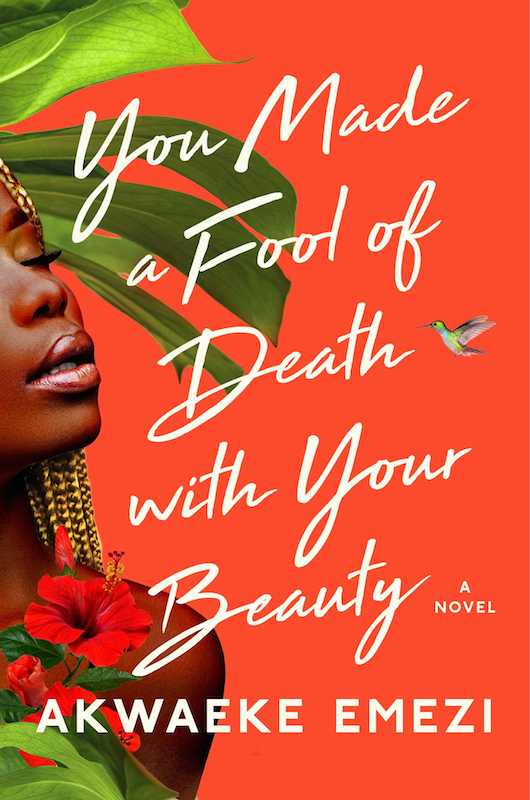 Feyi Adekola wants to learn how to be alive again.

It’s been five years since the accident that killed the love of her life and she’s almost a new person now—an artist with her own studio, and sharing a brownstone apartment with her ride-or-die best friend, Joy, who insists it’s time for Feyi to ease back into the dating scene. Feyi isn’t ready for anything serious, but a steamy encounter at a rooftop party cascades into a whirlwind summer she could have never imagined: a luxury trip to a tropical island, decadent meals in the glamorous home of a celebrity chef, and a major curator who wants to launch her art career.

She’s even started dating the perfect guy, but their new relationship might be sabotaged before it has a chance by the dangerous thrill Feyi feels every time she locks eyes with the one person in the house who is most definitely off-limits. This new life she asked for just got a lot more complicated, and Feyi must begin her search for real answers. Who is she ready to become? Can she release her past and honor her grief while still embracing her future? And, of course, there’s the biggest question of all—how far is she willing to go for a second chance at love?

Why would I want to read You Made a Fool of Death with Your Beauty? Simply because Akwaeke Emezi wrote it. And it’s also involves a queer romance!

Any of these books on your TBR list too?

BOOKS IN HAND • What Books Customers Are Buying in October 2021