US vs. UK: Ariadne by Jennifer Saint 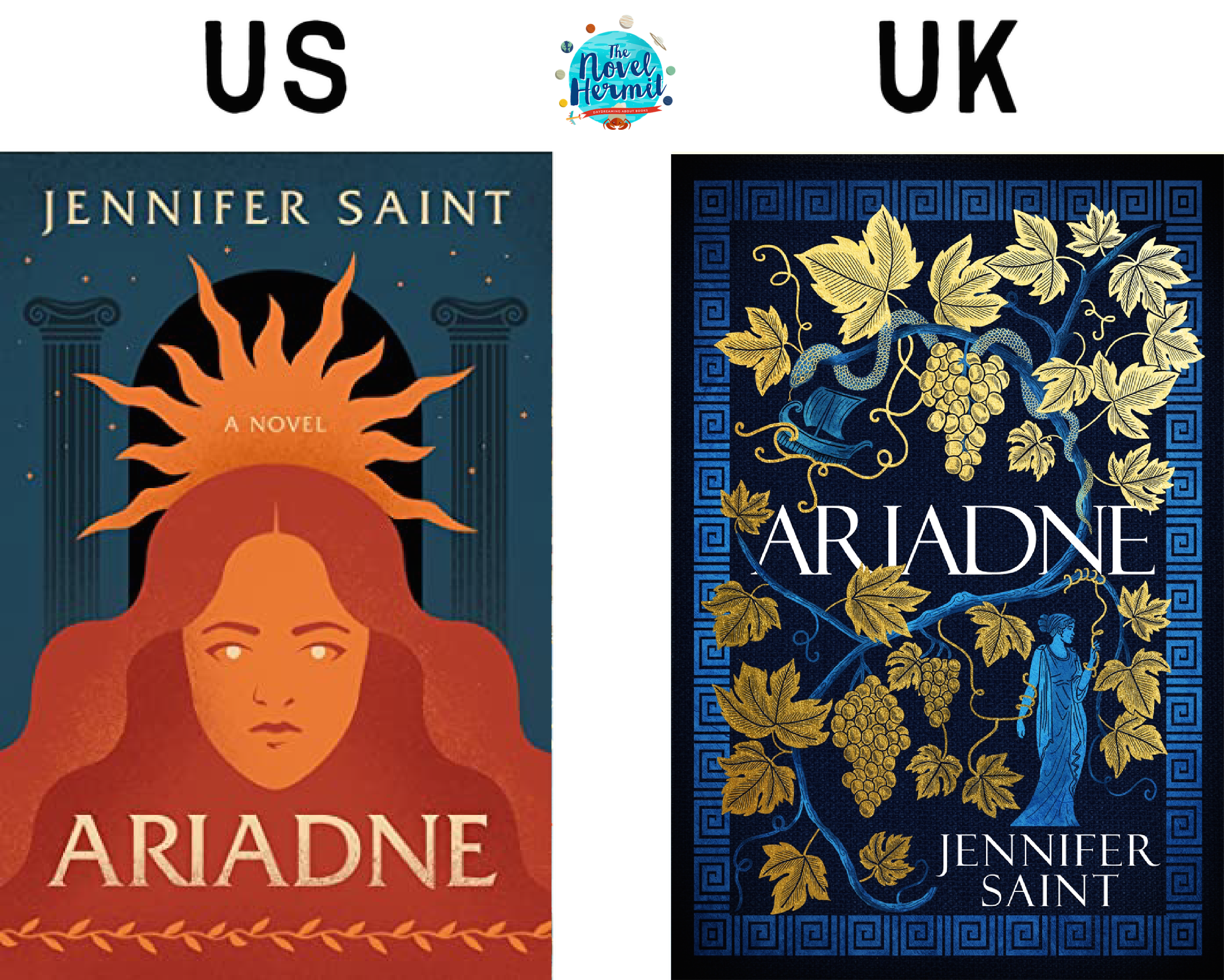 On the US cover, I assume that the woman in the art is Ariadne, the Cretan princess who is associated with labyrinths, the Minotaur, and Theseus. It thrills me that Ariadne is depicted with orange hair because it harkens to the many depictions through paintings of Ariadne with orange hair. I like the sun framing the top of her head; it looks like a crown. Very fitting. It’s funny to me though that there are Greek ionic columns in the background because it’s very much “this is a Greek mythology story” since columns associate with that.

You have the orangey warm tone of the US cover, and with the UK cover, it’s the exact opposite—cool tones with the blue moodiness and the very detailed art.

First off, I like that there’s so much texture in this cover—from the background to the actual art itself. It’s like the art was created on a non-smooth paper. There’s a lot of detail in every piece of art—the leaves with its lifelines, the grapes with the shading, the scales of the snake, the grooves on the branch, and the meander—the spiral decorative border—on the edge.

I don’t quite understand the depiction of the ship, the grapes, and the ship. I feel like it’s a lost opportunity that there isn’t a nod to mazes and labyrinths considering what Ariadne is usually associated with (this also applies to the US cover). Nonetheless, it’s still a beautiful cover.

Final Verdict: What cover do I like better? Uh, Maybe the UK cover?

US vs. UK: Elektra by Jennifer Saint 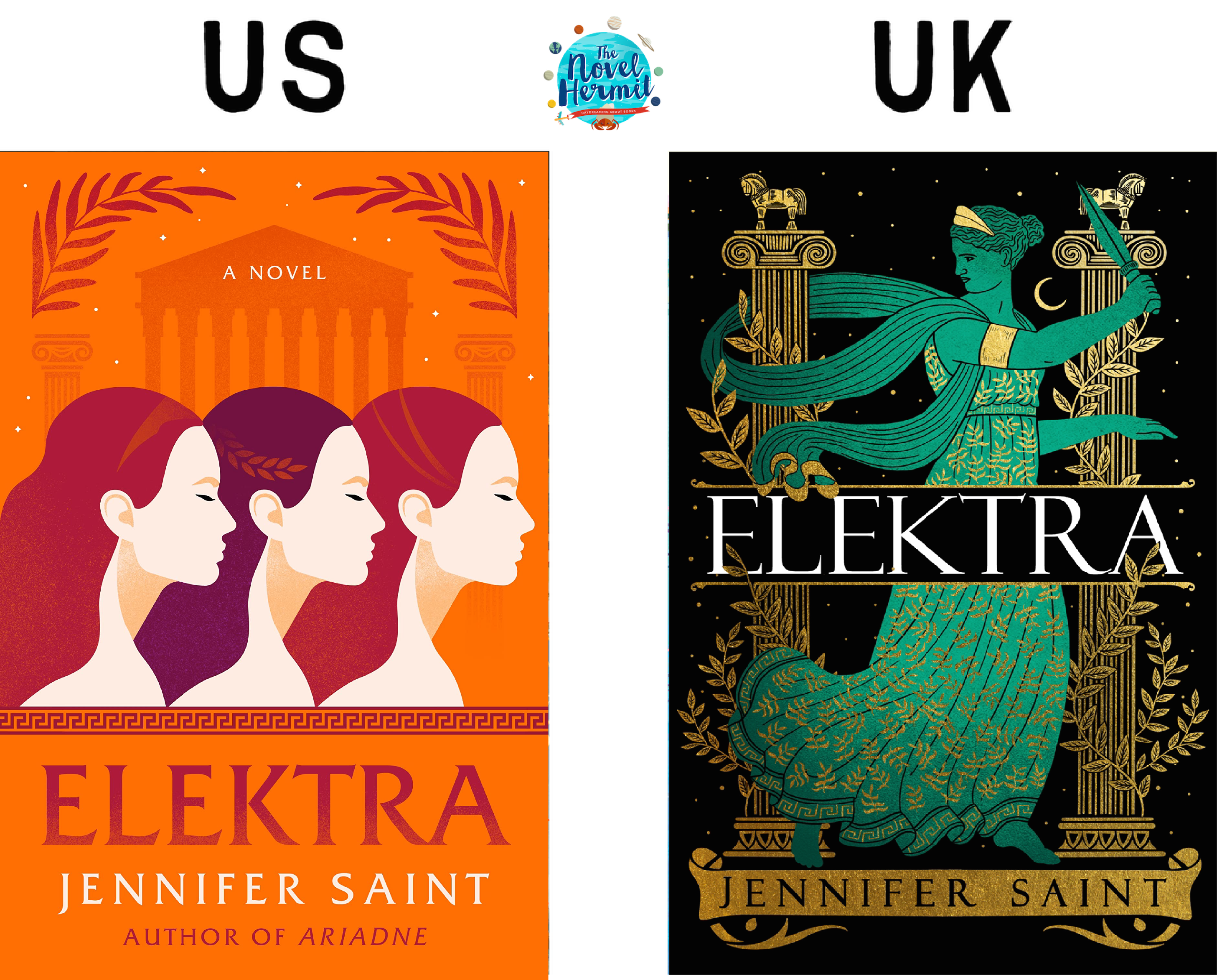 I love that both the US and UK cover of Elektra applies the same type of art style and design as Jennifer Saint’s first book, Ariadne.

I love seeing consistency. Like Ariadne, the US cover of Elektra uses the minimalistic art style and a similar warm color palette. Each woman on the cover represents the three women that Elektra is about—Clytemnestra, Cassandra, and Elektra. Each woman do look similar aside from the different hair wear adorning their heads. I like the leaves framing the top right and left side. You get the Greek ionic columns and the temple in the background. It uses the meander spiral design separating the art from the title. It’s just a nice simple design.

I love the UK cover simply because it’s green and the woman on the cover is holding a dagger. The color palette is mainly the green, gold, and black; the colors go well with each other because it still pops out on its own, but not too distracting. Everything I like about this cover: the details in the columns, the laurel leaves weaving around the ionic columns, and the gold leaves and meander spirals adorning the woman’s dress. However, what I absolutely love about this cover are the horses on top of the column because it’s a reference to the Trojan horse and the Trojan war, and the gold looking like foil.

Final Verdict: What cover do I like better? Definitely the UK cover.

Which cover design do you prefer? Would you buy the the US or UK cover?

Previous:
CURATION BY CEE • Podcasts
Next:
BOOKS IN HAND • What Books Customers Are Buying in April 2022

HOLY, MOTHER COVER! | US versus UK: The Wolf Wilder by Katherine Rundell