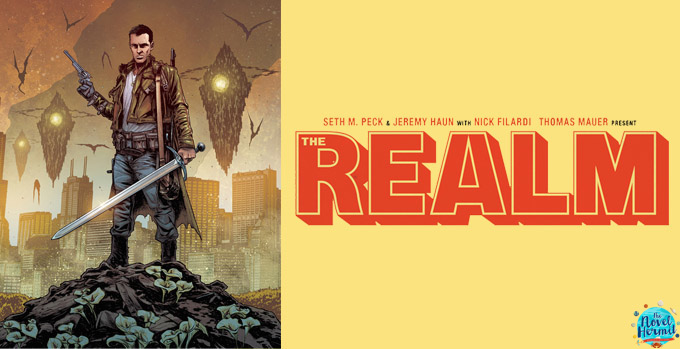 [quote]Fifteen years ago, our world was overrun by creatures of myth; orcs, dragons, and other nameless horrors threw the entire planet into total chaos. Today, the shattered remnants of civilization must fight just to survive in a deadly new era of violence and mayhem. While a powerful sorcerer marshals his forces, a group of warriors embark on a journey to reclaim our world from the growing darkness.

This world is not one you want to be caught alone in. In The Realm #1, danger comes in the form of orcs with battle axes, greedy men who want power and who is willing to do dark magic to get it, and an uncontrollable arm that is more than meets the eyes. This is a world where you need to know how to fend for yourself, or at least have someone who can do that.

This first issue introduces you to the various characters and their story—Will Nolan and his bounty hunting capabilities, a group of scientists—potential clients—who want to be taken West to Kansas City, a sorcerer who looks like a rockstar in black leather pants doing a sacrificial ritual, and a red-headed mohawk man who wears the skull of a horned creature and is exceptionally skilled at killing orcs. The story doesn’t focus on any of the characters too long and not a lot is given about why this world is the way it is; it teases us, but the promise of mythical creatures has me yearning to learn more.

There isn’t a lot of dialogue, but what makes The Realm #1 so riveting is the art and the coloring. The details of every line in the drawings and the coloring perfectly conveys the horror of this post-apocalyptic world. This world is dark and filthy. I’m so impressed by the coloring of the skies and lighting for the different characters we are introduced to. You would not want to be caught in this world, especially if you see the horrors.

The Realm seems like your typical post-apocalyptic comic, but hopefully this comic starts to stand out from the rest.

Will I continue reading The Realm? I think I will. I want to see more mythical creatures! (I want dragons!!)

[note note_color=”#BFD1D1″ text_color=”#ffffff”]Thank you to Image Comics for sending me this comic for review consideration. This does not affect my opinion of the comic or the content of my review.[/note] [note note_color=”#DDB349″ text_color=”#ffffff”]Are you convinced? Go buy The Ream #1 from your local comic book store, or these online retailers: Comixology · Midtown Comics · TFAW.[/note]

Do you want to read a post-apocalyptic comic that is a cross between The Walking Dead, Dungeons and Dragons, and Lord of the Rings? Will you be reading The Realm #1?

Previous:
HOLY, MOTHER COVER! • Changes in Tonight the Streets Are Ours by Leila Sales
Next:
FROM PANEL TO PANEL • No Way To Forget (Spinning by Tillie Walden)