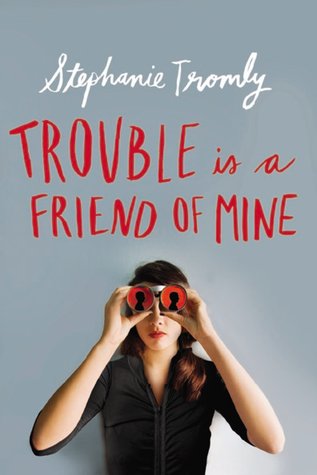 Trouble is a Friend of Mine by Stephanie Tromly

Her first day not in school (because she cut) in her new hometown that will soon be her old hometown (because she’s getting out of Dodge as fast as she can) Zoe meets Digby. Or rather, Digby decides he’s going to meet Zoe and get her to help him find missing teenager. Zoe isn’t sure how, but Digby—the odd and brilliant and somehow…attractive?—Digby always gets what he wants, including her help on several illegal ventures. Before she knows it, Zoe has vandalized an office complex with fake snow, pretended to buy drugs alongside a handsome football player dressed like the Hulk, had a throw-down with a possible cult, and, oh yeah, saved her new hometown (which might be worth making her permanent hometown after all.)

A mystery where catching the crook isn’t the only hook, a romance where the leading man is decidedly unromantic, a story about friendship where they aren’t even sure they like each other—Trouble is a Friend of Mine is a YA debut you won’t soon forget.

First sentence: “I’ve been telling Mom to change the drained batteries in the doorbell since we moved in.”

What happens when you cross Sherlock with Veronica Mars with Ferris Bueller’s Day Off? You get Trouble is a Friend of Mine, but the questions you really want to know the answers to are: 1. does the book warrant those comparisons? and 2. is it actually good? Well, I’m glad you stopped by.

Trouble is a Friend of Mine follows Zoe Webster, who recently moved to River Heights with her mom after her parents divorced, and Philip Digby, a suit-wearing teenager who befriends Zoe and ropes her into his investigation (more like shenanigans). They attempt to solve the mystery of the missing teenager as well as the weird cult that lives across the street from Zoe. The situations they get themselves into are both amusing, ridiculous, and dangerous. Will they be okay? Will they solve the mysteries?