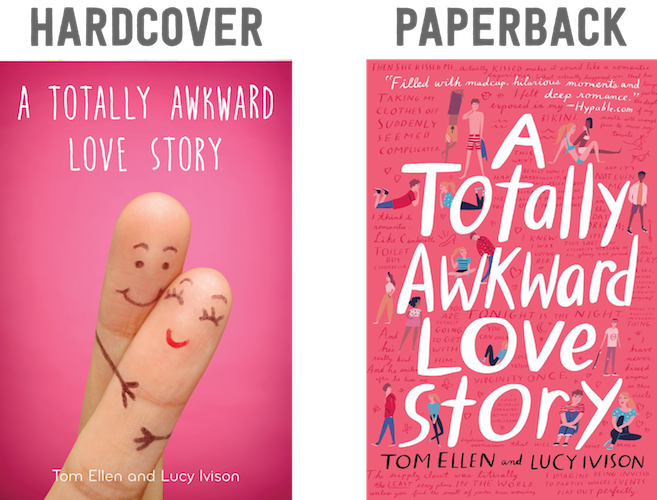 Well, that hardcover design is surely memorable. Two fingers acting as the main characters. It’s cute and creative. It does look awkward—at least to me—and those finger models do look like they’re enjoying each other’s company aka love. I like creative covers, but this cover doesn’t make use of the focus. The title’s typography looks out of place, and that background…it doesn’t look like it was done with much thought outside of the finger models.

The paperback design may not be as memorable as the hardcover, but I love it. There’s no awkward open spaces—it makes good spacial usage by having the title take up the majority of the cover. It stands out, but not enough to distract from the illustrations and texts. I love the text—I can only assume are lines from the book—used in the background; it’s not too busy or makes the cover look clutter. I love the the illustrations that shows the couple (and a couple of their friends) in different moments of them being together. It’s lovely.

Previous:
FROM PANEL TO PANEL • February 2018 Graphic Novel Releases To Look Out For
Next:
TOO MUCH TBR • March 2018

HOLY, MOTHER COVER! • Changes in Tonight the Streets Are Ours by Leila Sales

HOLY, MOTHER COVER! US vs UK • The Wolf and the Woodsman by Ava Reid